Fox Sports is doing a series on Resort Latitude Zero 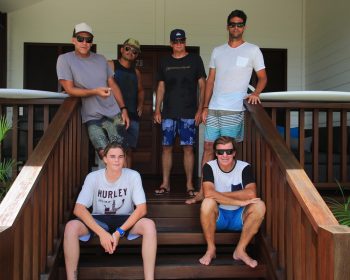 It also happened to coincide with a great swell, so all the guys were frothing to surf by day, and hang out around the pool, by the ping pong table and in our new Bungalow accommodation by night! Fox Sports has created a 2-part series out of their adventure Shot by renowned surf film maker, Andrew “Shorty” Buckley and produced by Fox Sports’ Robb Tasker. The series is all about the role of surfing in different peoples lives. We scored plenty of waves, sun, great music (Ash) and of course some wild ping-pong! Keep an eye out for the show, airing on Fox Sports Action, April 23 and 24, right after Bells finishes!