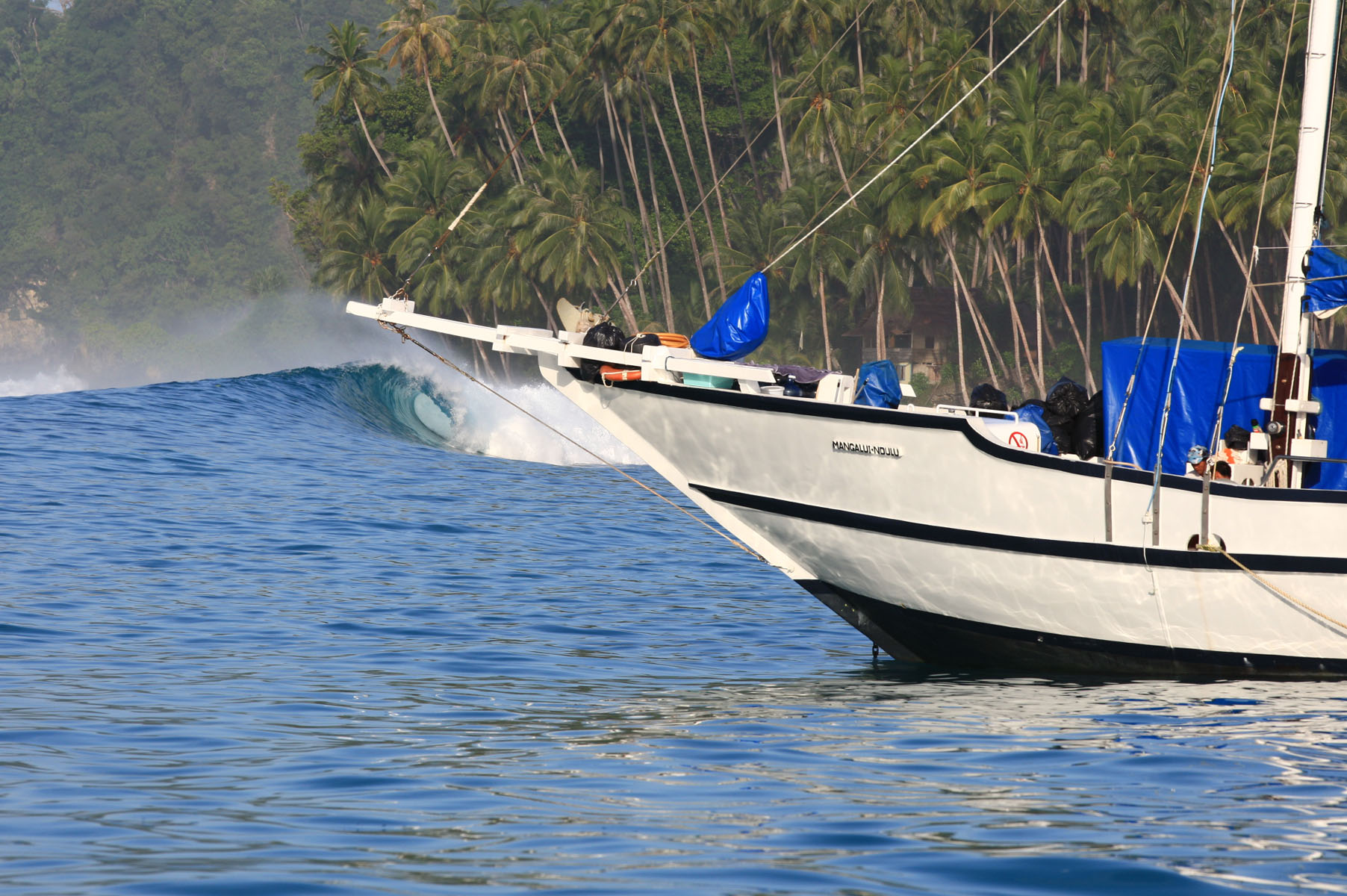 Welcome aboard the Magnificent Mangalui

Mangalui Ndulu translated into the local Nias dialect literally means ‘wave searcher’. She is an outstanding 84 foot timber sloop, custom-built for the sole purpose of searching for waves.

‘The Mango’ has chartered in the beautiful islands off Sumatra for over 2 decades. Her experienced captain and crew have hosted the world’s best surfers and witness and enjoyed some truly ground breaking sessions in virgin waves. Her reputation as being one of the finest Indonesian charter vessels afloat is well deserved.

Mangalui Ndulu is fully equipped to get you into the best waves in the world so all you need to worry about is trimming inside the tube.

We can customise your Indo surf trip from the bottom of the Mentawai’s through to the top of the Banyaks.

The Mangalui carries 5000 litres of diesel. She is powered by a Nissan Diesel V8 270hp for its main propulsion.

Generators are running 24 hours a day to keep all equipment up and running, we have 2 x 27KVA generators onboard. One is a Perkins Seagen and the other an Onan. Our big high torque slow revolving anchor winch is run by a three phase electric motor.

Our reverse osmosis Water maker keeps us supplied for as long as we want to stay out there.

Our super stable purpose built surf taxi dingy has 25hp with a spare engine up on deck ready to go.

Plenty of mask, snorkel, fin sets for everyone, as well as some Sea Hornett spear guns onboard as well. Mangalui’s fishing equipment is top of the range with four good game rods fitted with Shimano TLD 25 reels, heap of rapala and skirt lures, two spinning setups with plenty of poppers to get into the shallows, plenty of bottom fishing tackle.

For safety and emergencies, we have a satellite telephone onboard as well. This is available to you at an extra cost if required. Mangalui is equipped with the following safety requirements to ensure your maximum surf time, wellbeing and home interests are OK while you are on holidays.

The Foxy Lady is the original and ultimate strike weapon for surfing, fishing and diving. She has clocked up over 15 years of finding and surfing new breaks throughout the entire Sumatran island chain. She is the Mango’s side kick and accompanies all charters

The Foxy Lady is a 7.3m aluminium plate construction speedboat and is fitted with a Suzuki 250hp engine . She is fully equipped with all standard safety eqipment,  VHF radio, GPS and Depth Sounder as well as some creature comforts like stereo and eskys.

The MangaluiNdulu was built by well travelled surfers for the sole purpose of sailing the wave rich coastal islands off Sumatra. Matt Cruden and Greg Spindler designed a comfortable vessel capable of doing those extra miles to give you a little bit more on your Sumatran Surf Voyage.

For over a year Matt and Greg lived in a small primitive village on the eastern side of Indonesia on the Island of Sulawesi. Working closely with the Bugis boat builders to bring together some Eastern and Western knowledge and create the 82 foot solid ironwood and teak wood motor sailor.

The Bugis men are well known sailors and pirates of Indonesian history. Their sailing vessels largely influenced by the Dutch trading vessels of previous centuries, during which the Dutch moved into the area to reap the benefits of the ‘spice islands trading’.

After the six-week mission of launching the MangaluiNdulu across the ribbon reef lying offshore (using many hands, block and tackle, tug boats and hundreds of 44 gallon drums), she set off for a two-month journey around Indonesia for her test run with a few mates. Arriving into Sumatran waters in late October 1996.

The Mangalui has been operating out of Padang in West Sumatra since then doing surf trips up and down the coast, from Panaitan Island In West Java up to the northern islands of Aceh (North Sumatra) We are now proud to say that we can enjoy the benefits of all our efforts in building the Mangalui and its operation with many friends from all parts of the world. Her reputation speaks for herself with our high percentage of return guest who come to enjoy her mellow, relaxed vibe, memorable times and taste the epic waves Sumatra has to offer.

From the turn of the century, Matt Cruden continued to run charters with his wife and children on board for quite a few years. These days with an ever-growing family Matt has taken on partners and shares the ‘Mango stoke’ with them and our experienced Captains. Our experienced and friendly boat captains and crew are all fully ticketed to international standards, with 6 qualified crew on board at all times for maximum safety and service whilst at sea.

All our meals are prepared by qualified Chefs who set the highest standard. Our meals are fresh, tasty and wholesome. You can expect a delicious combination of Indonesian and Western cuisine. We provide generous servings to ensure you’re fuelled up and ready for your next session.

And don’t forget, icy cold Bintang’s are also included. After a long day surfing in Sumatra it’s hard to beat the feeling of that first cold one! The Mango has 10 bunks in total. 8 in a separate air- conditioned quiet zone and 2 near the saloon.

The saloon area is also air-conditioned and is a great chill-out area. Watch a movie, choose a book or just take a break.

Photos of the Action

We offer an amateur photography service at no charge. The Mango has a Canon camera and powerful 400mm Telephoto Lens on board. We won’t promise to get every shot but guests regularly comment on what a great service we provide.

Bring at least a 32GB USB for your images to take home. Your safety is of the highest priority. We have a fully equipped Medical Kit on board and the Crew have First Aid Training.