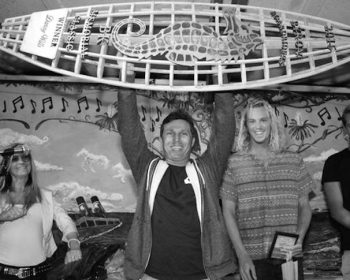 The Byron Bay surfer was announced as the winner at the Railway Hotel on Monday night.

It keeps the top honour in the Byron Bay Boardriders Club, with Luke Stickley and Garrett Parkes having taken out the award in 2014 and 2013 resepectively.

The open women’s division was won by Bridey McNeven.

“It was a great couple of days and the standard was the best I’ve seen here,” Byron Bay Boardriders vice-present Neil Cameron said.

“The surfing is as good as you’ll find at a professional contest.

“We had some really good surfers this year and everyone had to step up.”

About 180 turned out for three days of competition, with surfers coming from as far as Sydney and the Sunshine Coast.

Mark Occhilupo was there, with his son making one of the finals

Surfing started at The Wreck on Saturday before the final two days at Broken Head.

The club also raised $2000 for Mitch Bamping, who broke his neck and suffered a spinal cord injury while surfing in Bali two years ago.

Mr Cameron and club president Jennie King presented the cheque to Mitch’s mother Donna Bamping, who thanked the club for its continuing support.

It is the second year the event has run in June after it was originally known as the Easter Surf Classic.

“I think this was our most successful event in the 40 years of running it,” Cameron said.

“It’s a unique contest in that it caters for Under-8s all the way through to Over-60s.

“One of the best decisions we’ve made is moving it to June, with the weather being a bit more settled.”

Trips to Bali, Hawaii and the Mentawai Islands were part of the prizes this year worth $20,000.