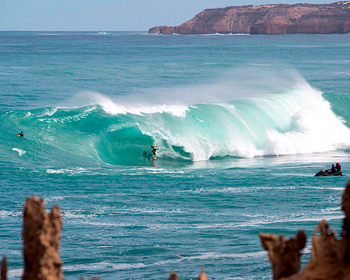 Earlier this month filmmaker Tony Harrington released Ion The Barrel Vol II with select screenings across Australia. The film left audiences in awe with a combination of jaw dropping barrel footage and insightful interviews from some of the best surfers in the world.

For Harro chasing the barrel is a lifelong quest. After dabbling in still images as a surf photographer in the 90s he transitioned to cinematography and found his true calling capturing surfing’s Holy Grail – the barrel.

Over the past twelve months Harro and fellow Central Coast surfer, Peter Hayes set out on a mission to chase the best waves on the planet. Their journey takes them to wild Western Australia, untamed South Oz, Hawaii, Indonesia and Mavericks.

The opening section set in Western Australia is a true highlight. Insights and footage of Gracetown local and former CT surfer Dave Macaulay, will leave you spellbound, as will the tube-riding prowess of Dino Adrian and Jacob Willcox who routinely make the desert pilgrimage to Gnaraloo and stay for months on end.

In the South Australia section Jeff & Josiah Schumacker illustrate what it’s really like to grow up surfing Australia’s most infamous coast. The South Oz slab they score will leave you slack jawed, however it’s the story telling from Jeff Schumacker that really sucks you in.

As the story changes pace with a trip to Indonesia we discover that Tai ‘Buddha’ Graham really does have the life we’d all envy.

No barrel film would be complete without a trip to Hawaii. A candid discussion with Jamie O’Brien and his reignited love for Pipeline after riding a 70s Gerry Lopez single fin sets the film apart. A roll call of North Shore stalwarts ensures. We meet regular wave of the winter nominee, Reef McIntosh, John John’s shaper John Pyzel, and witness the best footage from of a stellar Hawaiian season.

Australian Jamie Mitchell’s performances at Jaws and Mavericks are also incredible. His determination to put himself in life threatening waves on a regular basis is commendable and crazy all at the same time.

With appearances from Mitchell Rae, John & Paul Witzig, Captain Mark of the Mangalui Ndulu, Donavon Frankenreiter and more, there are more than a few pearls of wisdom thrown around.

What I enjoyed most about Ion The Barrel Vol II is that it strips surfing back to its roots. You realise deep down that camping, chasing swells and finding that ultimate ride is really what it’s all about.

“Filled with gritty interviews and riveting high definition footage of Australia’s heaviest slabs, Indo perfection, Hawaiian juice and the Mavericks matadors, ‘ION The Barrel VOL II’ will lock you in and spit you out in a hail of stoke.”

The film will not only appeal to surfers but mainstream audiences that are looking for an insight into a subculture of addicted barrel fiends.

Ion The Barrel Vol II will be available with the March issue of Tracks on sale Feb 3.