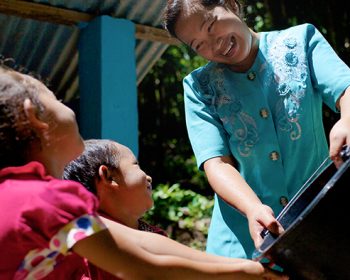 SurfAid has just announce that it has received non-government organisation (NGO) accreditation from the Australian Government’s Department of Foreign Affairs and Trade (DFAT).

SurfAid was founded in 2000 to work in the Mentawai Islands, off West Sumatra, Indonesia, but has expanded its field operations to Nias, the Telo and Banyak islands off Sumatra, as well as Sumbawa and Sumba in eastern Indonesia, and was involved in the recent emergency response to Typhoon Haiyan in the Philippines.

Gary Powell, the Assistant Secretary, Civil Society and Business Branch, Department of Foreign Affairs and Trade (DFAT), said: “For DFAT, being accredited as an NGO under ANCP (formerly the AusAID-NGO Cooperation Program) means that an organisation is able to deliver development projects with people in our region with an eye on getting results and making a real difference to people’s lives.

“Being funded under the ANCP means that the Australian NGO leads the way in delivering innovative aid programs that help reduce poverty in developing countries. The ANCP is an Australian Government funded initiative that supports Australian NGOs. Only accredited NGOs are eligible to receive ANCP funding,” Powell said.

SurfAid CEO Andrew Judge said that accreditation was a significant milestone on the SurfAid journey.

“It’s a tribute to the consistent support of the surf community and the work of our staff over the years,” Judge said. “It is hugely encouraging to know that an in-depth review of our program approaches and organisation has yielded this endorsement.

“Accreditation also gives access to government funding, which we will be using for the benefit of remote communities connected to us through surfing,” he said.