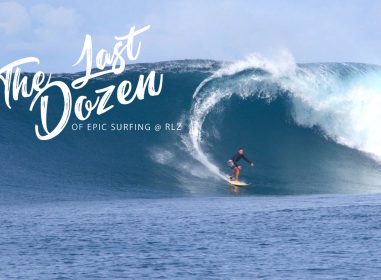 You have to be careful what you wish for in Sumatra – too windy and wanting a glass off? It will suddenly glass off to the steamy and stiflingly hot, skin frying doldrums for days. Maybe something a bit hollower to increase your chance of scoring the Indo dream tube? You may suddenly find yourself staring over a thick ledge of swell down to 2ft of water barely covering the flesh-eating coral below for the afternoon session. A little too hot during the mid-day lunchtime session and hoping for some clouds? A fierce whiteout storm may blow in out of nowhere and send surfers and boat captains scampering for cover. Not enough swell and wishing for a bit bigger? You may just get hit with the swell of the decade.

In July 2018 that is exactly what happened – The much-hyped swell of the decade. The forecast building up to the swell event certainly put shivers through the spines of most mortal surfers in Indonesia at the time.

For the surfers with the gonads and skill to take it on, every waking minute for the week proceeding was spent scouring over the web- searching weather maps, Google Earth maps, wind info, inside opinions on size, direction and exact arrival times to maximise the opportunity of scoring the waves of a lifetime.

Like most areas no doubt, we here at Telo first started collaborating the long list of breaks that simply would not hold such a phenomenal swell event a week or so out writing off all but a handful of set ups that are either tucked away enough to allow a smaller percentage of the more refined swell energy to wrap into the protected surf spots OR actually hold form and light up in 10-12ft of glory in the full path of every little bit of energy the Indian Ocean has to offer.

In the days prior BIG guns where dusted off from back sheds, injuries and fitness checked and the regime of quiet and early nights across the island chain commenced for all. This swell was the REAL DEAL and we knew the piece of reef we wanted to target- a rarely surfed sleeping giant of a wave that only starts to break in the biggest of swells.

On the first morning of the looming swell there where a few charter boats and resort speedboats anchored up and waiting. As the wind sorted itself out it was clear only a handful of guys would be seriously prepared and willing for this swell event at the Sleeping Giant and most would be spectating for a dam good show.

How big is it already without anyone in the water, is there bigger sets, is it holding, is there any dreaded clean up sets yet? The fear and apprehension was already present…. and this was only the entrée with much more ocean energy on the way over the coming few days. 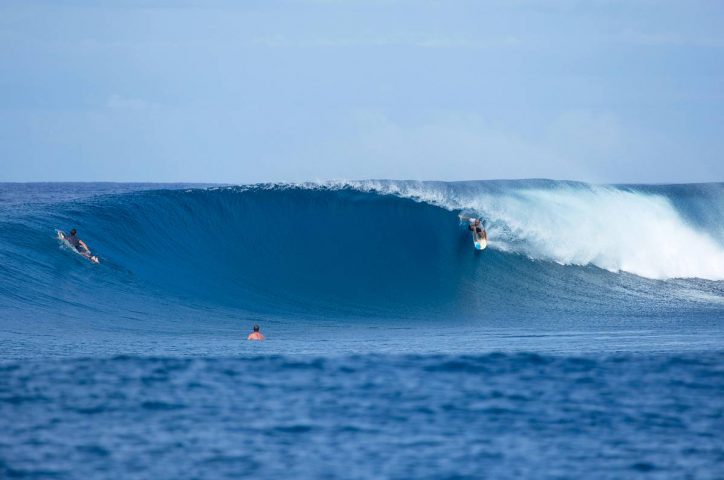 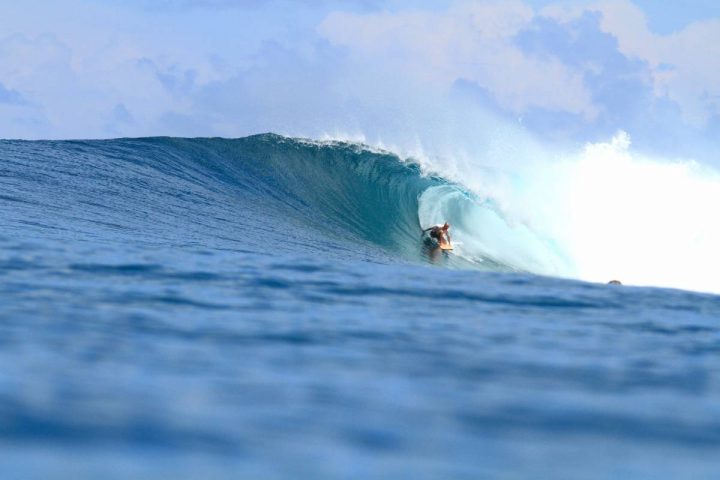 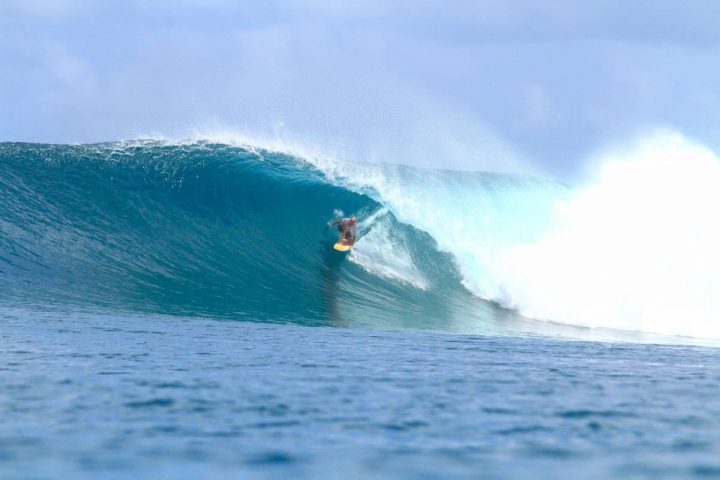 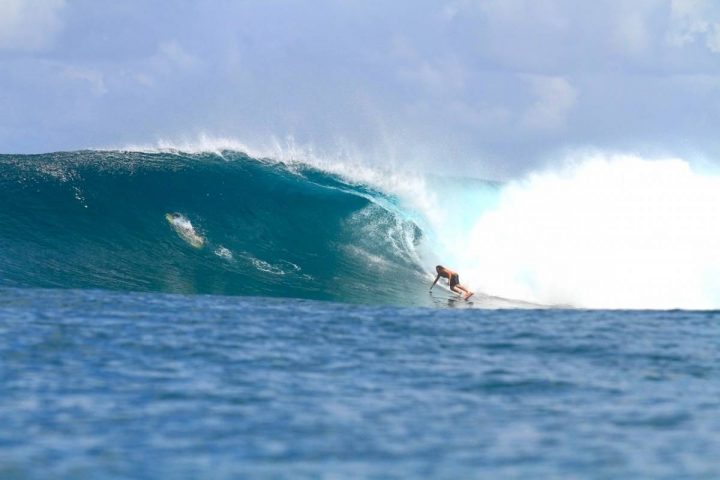 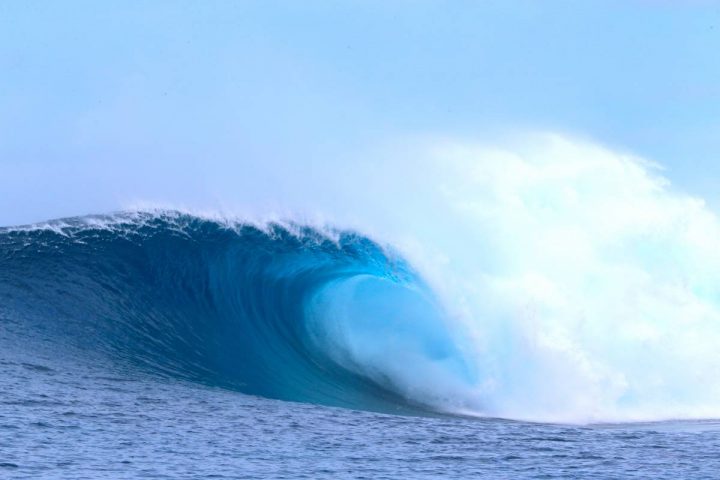 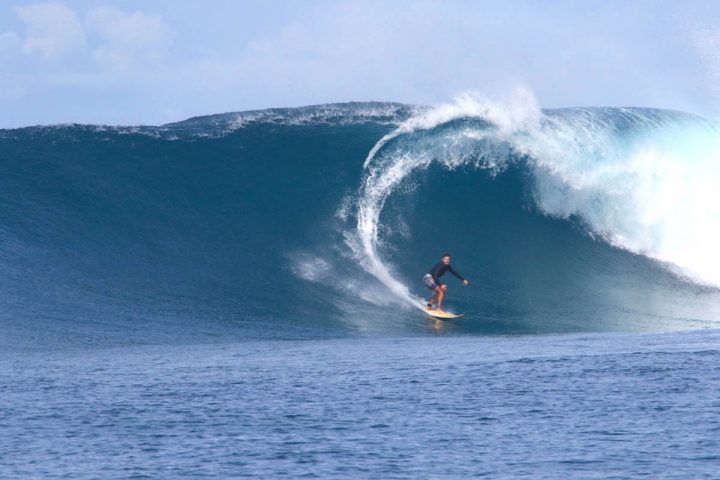 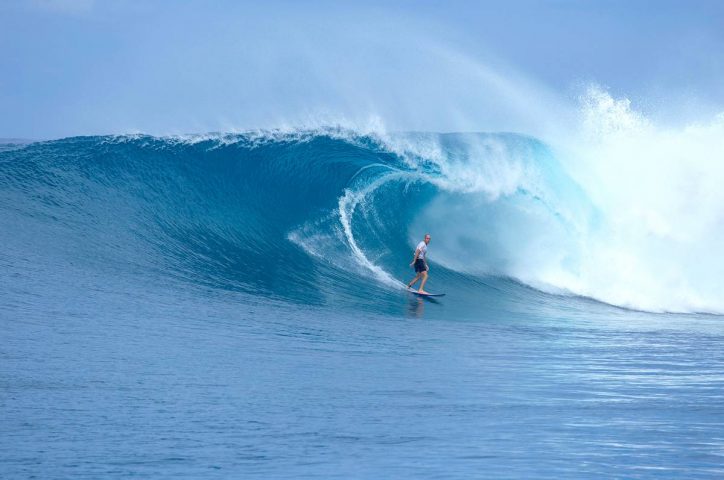 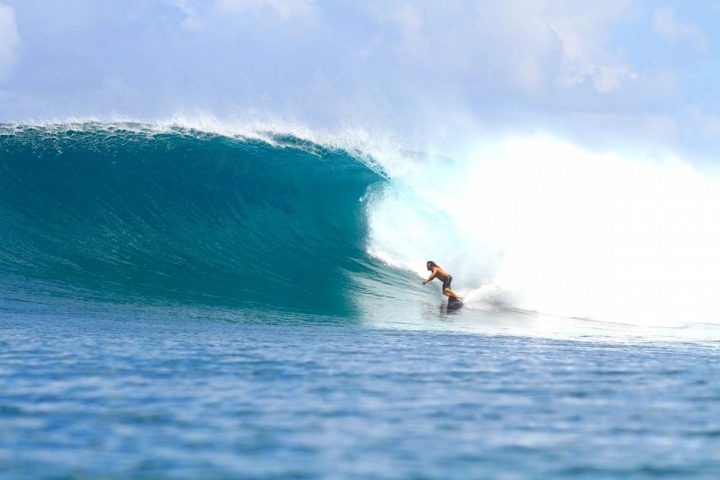 The wind held clean until about lunch time for the first two days with fullish tides and not yet peaking swell lines keeping the fear factor in check for two amazing days of manageable 8-10 ft morning sessions across the high tide.

This swell at The Sleeping Giant was going to be the domain of the Telo crew with surf guides and resort operators getting more and more comfortable in the testing conditions and sheer size of the waves, not by being greedy but by being prepared and the only ones truly committed to taking it on.

We are a pretty tight nit resort business community here in Telo and it is epic surfing days like this that bring us together the most. 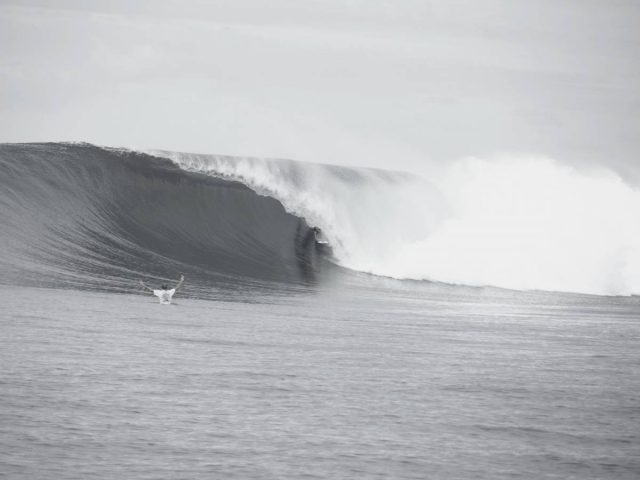 The swell hung in and was relentless for 4 full days of XL action. Day 3 saw the fluky Telo weather patterns change in favour of The Sleeping Giant allowing the clean offshore conditions and sessions to last well through the day and into the afternoon and this was the first time the conditions would be right for the normally optimum lower tide, but this was no normal swell event. The aligning of the afternoon offshore wind and low tide morphed what had been deemed “manageable” big waves up to this point into a new realm.  The easier outside roll in take offs had been replaced with a heaving “ledge” sending even the most committed of the crew heading for the channel or horizon with each approaching set.

These are the swells we dream of, and this one will be remembered as the biggest to date in our memory. 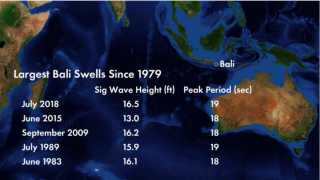 July 2018 will go down as one of the best surfing months across Indonesia in our generation, especially for the lucky crew on hand in Telo – Matt, Dingo, Sooly, Jack, Mario all getting the elusive waves of a lifetime but the swell was owned by Chaddy on his backhand who relentlessly “turned and burned” taking off under the lip when the biggest and gnarliest shadows appeared on the horizon at the swell’s peak.

The swell signature for this event is well documented and dissected on Surfline.com