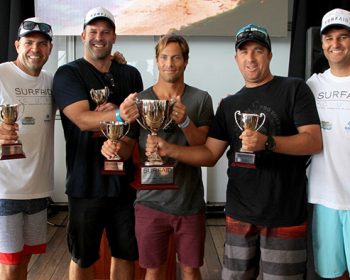 Three former ASP world champions – Mark Richards, Tom Carroll and Mark Occhilupo – are psyching to compete in the SurfAid Cup, which will be held in conjunction with the Drug Aware Margaret River Pro, Western Australia.

This will be the third SurfAid Cup proudly supported by Surfing WA and it will be held on Sunday 6 April 2014 at Southside, Surfers Point, during the WCT event.

Tom Carroll is stoked to be getting back in competition-mode. “Bring it on I say! I know the bee under the bonnet is still buzzing for Occ and MR once they hit the water. Knowing my usual response, I will bite the hook for my team and run with the bait,” Carroll enthused.

“I had so much fun surfing last year – it was such a cool event,” Hobgood said. “It was competitive and I was super impressed with all the money the teams raised.”

The SurfAid Cup is a tag-team style event with four surfers per team, plus one pro/legend from the selection pool in order of their team’s fundraising results. The team that raises the most wins the SurfAid Cup fundraising trophy.

The CineAds team is the defending two-time surfing champions and Caporn Young won the fundraising trophy last year by raising more than $42,000, a record for the SurfAid Cup which is also held in Sydney and Newcastle in Australia, and Malibu in California, USA.

Other top pro surfers who have indicated they will compete in the SurfAid Cup Margaret River include Travis Logie, Bede Durbidge, Adrian Buchan, Kai Otton, Laura Enever and Tom Whitaker.

You can support the teams here …