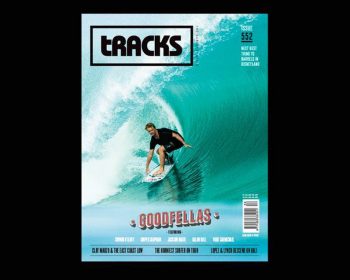 Tracks 552 travels to surfing’s Disneyland, the Mentawai Islands, along with five Australians who are hell-bent on qualifying for surfing’s premier league, the top 34. The ‘Goodfellas’ score dreamy waves, dodge sea snakes and survive the heaviest wave in Indo.

Meanwhile surfing icons Gerry Lopez and Wayne Lynch deliver a master-class in style when they return to Uluwatu.

Clay Marzo goes looney as he hunts the same swell that swallowed surfers in the Cape Fear contest.

Goodfellas – The surfers have only had a couple of down days after returning from a WQS in Japan and here they are again, hustling through airport queues, dragging six-packed board bags and downing sleeping pills so that the contortion required to catch z’s on a cramped Air Asia flight comes a little easier. The Japan contest was miserably small and none of our crew has secured a result worth talking about. The local sushi joint was apparently the only saving grace. “I ate 20 plates in a sitting,” boasts Wade Carmichael whose mane of hair, hulking frame and forest of facial growth make him look like he should be slaying dragons on the set of Game of Thrones. In Japan they were no match for the wing-heeled backside whips of event winner Evan Geisleman, explains Kalani Ball, himself a lithe natural footer with a penchant for technically difficult airs.

Anticipation levels are running high. The wave prophets have forecast some serious bumps for our trip to surfing’s Disneyland.